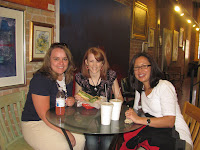 Last weekend was my annual Sisters Retreat in Eden Utah. It's with my in-laws, where my hubby is 5th of 8 kids. Which means there are 9 of us (with my mother-in-law) which means we have an awesome group of fun!
We took a drive into Ogden and saw some adorable signs from Jeremy to his girlfriend. We never did see the final sign so we were figuring out all sorts of scenarios of how he actually propsed. Like standing in the middle of main street with bunches of roses, or that he got all of his friends to hold a ginormous banner down the side of the street as she drove past. 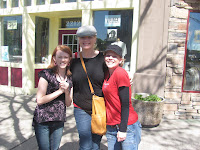 While browsing down 'historic 25th street' my sister-in-law kept telling me that she thought this girl was famous. After following her up the street for a while we finally snagged a picture with her (well I took it so I wasn't in it). We met Melissa Peterman (I know her as Barbra Jean from the show Reba, but you probably know her as the host of Singing Bee on CMT.) She was totally adorable and super sweet. I guess she was in town doing a comedy show at Wiseguys but sadly we had plans that evening so we couldn't go see it. I bet she was hilarious though.
*****

For those of you following my last post I think I may have reached a decision. I got online to start doing some research. Found an amazing doctor (heard lots of great things from friends who went there too) and was getting more information. I was calling for an appointment for a consultation and realized that I completely underestimated the cost of LASIK. Apparently I only have enough to do one eye, and since thats not really what I want to do, I'm not going to do it.
The good news is I'm not terribly disappointed since the other option (a trip to Southern California) is still a great one, in my opinion. So now I get to plan a fun vacation. And really it works out well because this fall there is a chunk of time hubby can get off work so we can make it longer and really enjoy it.
*****

Took my little guy in the doctor last week. He's almost three but in order to get him registered for preschool this fall we had to do the visits now. With my husband and I being pretty short we haven't been surprised that our kids are too. Although at this last visit my little guy reached his all time lowest mark on his height scale, bottoming out the charts at .02% of kids his age. Thats right, he's not even in the first percentile. Since he's near the magical age of three that means we have a plethora of fun tests ahead of us. Joy.
Posted by Cranberryfries

I think you should do one eye, and wear a patch over the other one.

I'm glad your decision was able to be made for you. It makes it much easier to make. :) And, spending time with the family in So. Cali. will be awesome!

Poor little T. Maybe, he has hit a non-growth spurt or something. I'm sure he'll get to the first percentile again someday. :)

PS - I'm glad you had a good time with your sisters. And, even though I don't watch Reba or CMT, I recognize Melissa because of flipping through the channels and seeing her on Reba. :)

Stupid lasik has to be so darn expensive. I don't know how anyone can afford it. At least you still have another fabulous option!

Sorry to hear that Lasik didn't work out for you. I'm glad that you get to spend time with family instead. Not a bad switch. I still think you should head to washington instead of Disneyland, but that's just me. ;)

Too bad about the eye but it's always nice to pick between two awesome things! And I LOVE your short baby. Every time I see him I giggle. He's so cute!

So awesome that you had a great time with your SIL's & that you met 'Barbara Jean'. She is hilarious!

I know you'll have a wonderful time in Southern California with your family! :)

Probably you have heard this before, but sometimes Lasik makes things worse. I think So Cal with your hubby sounds like a much better idea. Be sure to go to the preserved beach at La Jolla. sigh . . .

My older sister has two boys that got to do all the short kid tests. I think both of them ended up having to have hormone? shots every day. kind of crazy but mostly a pain.

If it makes you feel any better, my husband recently found out that he is not a candidate for lasik. He was super bummed.

Looks like a fun girls weekend! I need one of those.

I need more sisters or sister in laws so that we can do somethin' like that. Sounds fantastic.

I think T and my little R should get married. She is only in the 15% for height. They'd be perfect and then I'd know she was getting super cool inlaws. :)
So fun to see you on Friday. Loved the shirt you were in, it was a great color on you!

First of all - YEA DISNEYLAND!!
Second - yea tests :(. It's so hard not knowing how it will all turn out. Especially with this happening for a boy. You just need to make sure he a) has a BIG personality :o) and b) gets really good at gymnastics. You know I went through a bunch of those tests too (when I was 8) with the final result being - "eh, you can do growth shots if you want." We opted not. It might've been a different decision if I was a boy though. Don't know. Good luck.

I loved Melissa Peterman on Reba... not a fan of the singing bee though... I really wanted to see her show, but was babysitting all weekend. How fun that you got to meet her!!

As for the LASIK... sorry it didn't work out... yeah, it *is* a little pricy I guess (I sacrificed all the money I had been saving for a new car... my car is fine, just old; but I'm single and was living with my parents at the time, so it wasn't a big hardship). Someday I'm sure you'll be able to get it though, and you'll love it! Have fun in California!!