Back around the beginning of November news started trickling out.

The rumors are true.

They are totally making a spin-off of my all time most favorite tv show ever, Boy Meets World. It'll be about Cory and Topanga's daughter Riley and will be titled GIRL MEETS WORLD. (Here's the original article I saw announcing the greatness TVline.) 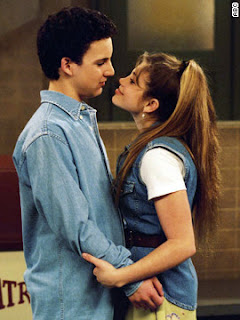 Thing is though, it'll be about their teenage daughter. Which considering how disney does teenagers lately I'm not totally sure about this. I'm not sure if it's the directors or actors but most of those shows are bursting at the seams with too much overacting and it sorta makes me want to barf.

Well it's in the news again since just yesterday it was announced that both Danielle Fishel (Topanga Lawrence) and Ben Savage (Cory Matthews) have signed on to be on the show (or at least the pilot for Danielle! It sounds, though I'm not sure, Ben has signed on for a few more episodes than that.)

You can see the Huffington Post article about it & here's an Entertainment Weekly article. 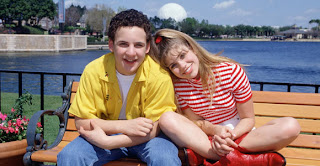 However there is a HUGE bright spot for the show and that is Michael Jacobs is still involved with it (the original creator of Boy Meets World and who also worked on shows like Charles in Charge and Dinosaurs).  That man has had many a good visions in the past so I'm crossing my fingers (and toes and everything else) that this new show doesn't sour my love for this tremendous old show!

(In case you doubt my love for this show, here are just a few older posts where I mention how much I love it.)
Posted by Cranberryfries

I heard about this. And I totally hope they don't ruin the old show with this new one. But it sounds so good. And I hope they get all the "old" actors to come back and play who they played before. That would be so awesome.
ABC Family runs the old seasons of Boy Meets World every morning. Love watching it, and laughing.
Just can't wait!

This is so hilarious! I mean awesome! I for sure have to tell my old roommate Jessica about this. (Did you ever meet her?) You guys were both super in love with the show. I will for sure watch it and think of you all along the way. ;)