A Night On the Town (And Helping Kids Too)

Last saturday was pretty much a fabulous night. Emily, Jenni and I met up at Olive Garden for a delicious dinner (oh I hadn't had that salad and bread sticks in a long time!) Of course I stuck with my old favorite (Chicken Alfredo). Are there certain places you go to eat and you order the same thing every time? This is always that place for me.
Then we headed over to the big event for the evening, "A Book For Every Child". We were helping with the silent auction along with Tess Hilmo (whose book A Name Like Love comes out in Fall 2011). There were so many great things on the auction tables. A few things I wished I would have won like an ARC of The Lost Saint by Bree Despain, or an ARC of Matched by Ally Condie, plus there were things like Shannon Hale bragging about you on her blog or going to dinner with Brandon Mull or James Dashner. Oh, there was just a little coveting going on. :) 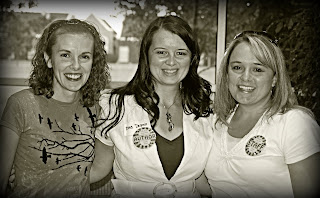 Heather, Bree Despain, Debbie
(Photo courtesy of FireandIce)
While we waited for the bids to come rolling in, we got to sit in on the entertainment. Shannon Hale and James Dashner MC'ed (is that a word) the evening and I'm pretty sure I'd pay good money to see those two do a stand up routine together. Well, I basically got that anyway. Hilarious! 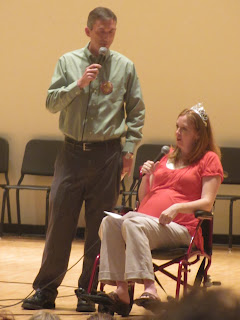 As they were reading off a list of some bigger ticket items up for auction James suggested that Shannon see how much she could get for her two placenta's (she's having twins later this year). She also bet him $5 that Brandon Mull could pull in more money for his item 'dinner out with him' than Dashner could for his 'dinner out with him'. I happen to know who's item finished higher. :) No but really, talk about something sweet to bid on right?
Divine Comedy came out and had some funny skits, some of which I found out later that evening when talking to him, Brandon Mull auctually wrote up. He joined the group on stage for a few scenes, my favorite being the retelling of 'Jack and Jill go up the hill' from different people/authors.
My favorite part of the evening was the author panel.

Pictured: James Dashner, Brandon Sanderson, Bree Despain, Sarah Zarr, Ally Condie, Jessica Day George, Brandon Mull, Shannon Hale
A few of my favorite things they said were:
Sarah Zarr said writing is a craft not an art. I can't remember exactly how she said this next part but something about how we need to continually practice it, it's not just a gift.
Shannon Hale quoted Sherman Alexie that the rain dancers always work because they never stop dancing, so it should be with our writing.
Considering the talent they had on stage I could have listened to them for a few more hours, but they were good to stay on schedule. Afterwards we went to finish up the auction and help the winners gather their prizes.
My friend Emily got a few books to get signed so when the crowds died down we got in line to get her books signed. Jessica Day George was sweet and told us how she collects stamps and brings them to her signings as thing to add to her signature in the books. I liked that.
We also chatted with Brandon Mull and since we were at the end of the line got to talk with him for several minutes about his earlier skits, panel discussion and the new addition to his home recently (his wife had a baby a few weeks ago).
Most of the authors had been there all day, with the writing classes earlier, and after we had helped clean up they were up for a treat so the gals that came with me to help: Jenni, Shauna, and Emily, met up with the authors Valynne, Bree and Tess (taking the picture). 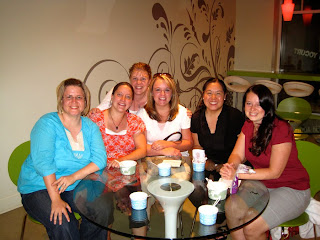 (Photo courtesy of Jenni_Elyse)
Oh! Did I mention we went to Spoon Me? We had a good time with all of their sayings they had posted on the cups, outside signs, and even the napkins. 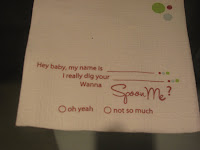 Sounds like a fun evening! My coworker's name is Shannon Hales, but that's neither here nor there.

Your pictures of the author panel and James and Shannon turned out so much better than mine did! You can actually see the people. ;)

It was a lot of fun! I'm glad we were able to help and do what we did.

It was fun, wasn't it? thanks for your help! I'm already looking forward to next year :D

What a fun time:)

And by the way, I always order the same thing at Tucanos. The all you can eat beef:)

I order the same thing every time at every restaurant. Sometimes, I think I should branch out but I just don't. Actually, I've been going to cafe rio and getting the same burrito since around 2000. The first time I got something different was a salad about a month ago.

fun, fun, fun! thanks for the recap.

i predict utah authors will take over the world.

I'm so jealous that you had such an inside scoop at the Charity Event! I bet that was an awesome night/weekend. It was so fun to meet you at the blogger thing last Saturday! I'm looking forward to following your blog in the future. Take care, Lyn

Having met James D at a book signing here in my little town I would say that, if you won dinner with him, he would have brought his wife, so what's the point? Also, Brandon Mull grew up in my little town and in my little hometown ward, though I have never met him. Sounds like you had tons of fun!

So much fun and for such a great cause! Thanks for sharing this event recap. Looks like you had an awesome time! :)