Readers, let me invite you to get to know the fabulous Bree Despain.

I met Bree because of my cousin Brodi (they're in the same writing group). I started reading Bree's blog and the opportunity came up to be on her Street Team for The Dark Divine. I was selected and got to do all sorts of cool things like make a book trailer, wear my fun shirt around town, pass out bookmarks and stickers and attend her release party. It was all super fun.

Then I started going to more author events around town and we kept running into each other and eventually visiting more and hanging out a bit. Bree is hilarious. Seriously. Especially if she's trying to drink water. :) (That one is for you Bree, notice I didnt include any incriminating photographs, just like I promised.)
Oh and just FYI, Bree's currently giving away a pretty big prize over on her blog (promise to come back over here and finish reading and I'll tell you what it is ok?). Go on over and comment to be entered to win a Kindle!
So on with the interview. 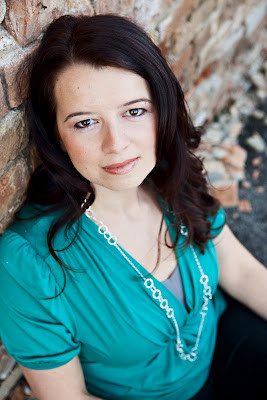 1. What was the best advice you got before you were published (or on your writing journey) ?

The best advice I ever got was to be prepared for it to take about 10 years of serious writing before you'll get published. At first I found this discouraging, but about 7 years into my wanna-be-writing career, I embraced it. I started telling people I was 7 years into my my 10 year plan to get published. People really respected that, and didn't feel bad for not being published yet. Luckily, I sold my book at 9 years and I felt really good about beating my goal.

2. If you could meet one of your characters for lunch who would it be and what would you talk to them about?

I would love to take a ride on the back of Daniel's motorcycle and then have a picnic in a park while he told me everything he hopes will happen in TDD3. 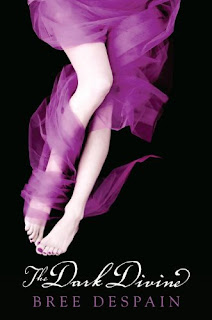 3. What’s been a fun perk of being published?

All the fun people I've met so far. I'm an author-fan-girl at heart, so getting to meet other authors is a lot of fun. I've shared meals with greats like Holly Black, Melissa Marr, Ally Carter, Jenn Lynne Barnes, Margarette Stohl, Kami Garcia, Jay Asher and so many more awesome authors. Oh, and I danced to "The Love Shack" with M.T. Anderson.

4. Looking forward to anything in the future?

The paperback release of THE DARK DIVINE on November 23rd, and the release of THE LOST SAINT on December 28th. Also, TDD has been optioned for a movie, so I am really hoping something happens with that.

5. Any upcoming events I can tell my readers about?

We're having a big launch party on December 28th at the King's English Bookshop for THE LOST SAINT and everybody is invited. The event starts at 7pm, and I'll be speaking in the art gallery next-door to the bookstore, so there will be plenty of room for everyone.

6. I heard you say once you filled your living room with giant post it notes to help yourself brainstorm ideas for The Lost Saint, the sequel to The Dark Divine. Have you done anything crazy to help come up with ideas for your next books?

Well, I did the post-it note thing again, but not on as big of a scale. My Wonder Woman notebook is current brainstorming tool of choice. 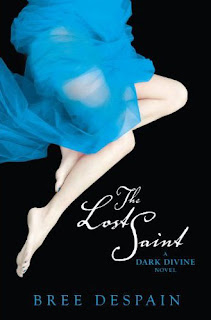 7. How’s your new house coming along?
Totally great. Both floors are framed out and it has a roof. The best part about the new house is that I'll actually have an office to wallpaper with giant post-its instead of the living room.

8. What song is on your playlist right now for your current project?

9. After TDD was published, be honest, did you go test driving vintage mustangs?

Not yet. I mostly just stare at them longingly when I see them on the side of the road. Sigh. Maybe someday.

10. I’ve been dieing to know, is your husband’s real name Brick?

No, actually. His first name is Owen, but he's never gone by that. He's always been called by his middle name: Bricklan. When I met him he went by Bricky, but now that he's older, he prefers Brick.

11. Your family gets pretty decked out for Halloween. It’s a big holiday in my house too. Is this collaboration by both you and your husband or does one of you like it more than the other?

Both hubby and I are big Halloween geeks. It comes from being drama geeks together. But hubs went to college on a drama scholarship and was required to take a costume design class, so he's the one in our house who knows how to sew. He hand-makes a lot of our costumes.

12. What’s a good book you’ve read this year that you’d recommend to others?

My fave book I've read this year was ONCE WAS LOST by Sara Zarr. I'm currently reading THE GHOST AND THE GOTH by Stacey Kade and I'm really enjoying it.
Thank you so much for the fabulous chat Bree! I sure appreciate it!
Add Bree Despain's books to your: Goodreads | Shelfari

Buy Bree Despain's books: The Kings English | The Book Depository
Amazon | Indie Bound
Win it!
In honor of my cameo (my name appearing in the book The Lost Saint!) I'll be giving away a signed copy of The Lost Saint (after it comes out). To enter leave a comment by December 10, 2010.
Posted by Cranberryfries

I love all these interviews that you're doing with authors. And, it was really fun to read this one from Bree since I know her. I can't wait to read The Lost Saint and have her come to a party again! :)

NICE interview! Seriously, you are the WOMAN!

You are so awesome, Debbie! How fun that you're getting to know all of these amazing authors. Those were great questions, you can tell you're friends. :)
Can't wait for The Lost Saint!

What? You have a cameo? Sweet!

You have a cameo in a book? That's awesome. And also-I'm definitely entering to win a kindle:)

Great giveaway Debbie. I would definitely love a signed copy of The Lost Saint. I'll be looking for you in the book. Hahaha. That is so cool.

Very fun interview. I love getting inside the heads of these authors. :)

Great interview, Debbie! I can't wait for "The Lost Saint". I wouldn't mind riding on a motorcycle and having a picnic with Daniel either. ;)

Motorcycles and picnics with Daniel?! Sign me up, baby!!! :)
I've only read one book with my name in it, and it certainly wasn't referring to me! So fun Debbie!

What a great interview! Thanks for stopping by my blog- it's validating to know someone else has a hot chocolate addiction like ours! :) How fun that you're having a giveaway, too, I love new books.