Remember that chocolate cook book I'm giving away this week? You have just a couple of days left to enter. But while we wait to find out the winner let me introduce you to my friend Annette Lyon.
I first met Annette when I signed up to take her two-month-long writing workshop with my pals Susan and Olivia where I learned some of the ins and outs of the writing and publishing world and got all sorts of great tips & tricks to writing and got a lot of encouragement and writing exercise ideas. I've also gotten to see her around at several of the events I've gone to as she's very active in the local author community.
She was kind enough to let me ask her a few questions to share with all of you. Enjoy! 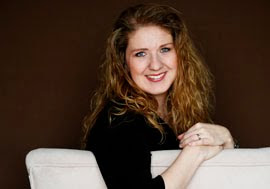 •Q: What was the best advice you got before you were published (or on your writing journey)?
A: Join a critique group. Mine is fantastic, and I wouldn’t be anywhere without them.

• Q: If you could be one of your characters for a day, who would you be and why?
A: Hard one. I put my characters through the wringer, so I don’t know that I’d want to be in their shoes! If pressed, I’d probably say either Tabitha (Tower of Strength) or Bethany (Spires of Stone). They have a level of strength and spunk that I don’t. Tabitha is more like me as far as personality and temperament goes.

• Q: If you could meet one of your characters for lunch who would it be and what would you talk to them about?
A: Probably Abe (House on the Hill). His story in that book grew a ton from the first draft to the end as I learned more about his past. I have a feeling there’s more I don’t know about. He’s my readers’ favorite hero, hands down. I'm not sure why--maybe because he’s so complex?--but he's one of my favorites too.

• Q: What’s been a fun perk of being published?
A: One big perk I didn’t anticipate is the opportunity to meet new people and attend events that wouldn’t have been open to me before. I’ve had the chance to rub shoulders with some pretty amazing people.

Also, it may sound odd after almost a decade, but I still get a bit of a thrill at seeing books on the shelf at a store with my name on them.

• Q: Looking forward to anything in the future? (signing events, new book coming out, conferences attending?)

A: May 7th I find out if I won a Whitney award for my last novel, Band of Sisters. It’s currently a finalist for Best General Novel. At the LDStorymakers conference prior to the award gala, I’ll be teaching three classes, moderating a panel, and running a publisher-attendee event.
Edited to add: CONGRATS to Annette who won the Whitney award for Best General Novel!!
I’m working on several projects right now, although I have no solid release dates for them. I will likely have a fourth book available on the Kindle in the next couple of months. My first two books (out of print elsewhere) are already there, as is my grammar guide. This next one will be a middle-grade fantasy.

•Q: Any upcoming events I can tell my readers about?
A: June will be the 3rd annual Teen Writers Conference, which has been a ball to be part of. I’ll be teaching there as well—and I have teens of my own to bring along, so it’s a mom-kid day!

• Q: Biggest/hardest change since being published? (in writing or life, etc)
A: One of the hardest things is the realization that getting a book contract is not even almost the end of the road. It’s the beginning of an entirely new journey, and if you don’t work just as hard (or even harder—the clock is now ticking with releases and readers waiting), you’ll fall behind and lose what you worked so hard for.

• Q: What’s a good book you’ve read this year that you’d recommend to others?
A: The Book Thief, by Markus Zuzak, was so great. (And it was the first book I bought for my shiny new Kindle!) Beautiful writing, great story, fascinating technique.

I also got to read Variant, by Robison Wells, which is a great YA. It was a pre-press version, so everyone else has to wait until this fall. (A perk to being in a great critique group!)

• Q: If your load was lightened, what is a guilty pleasure you would partake in?
A: Nap. Hire a housekeeper and/or cook. Travel. Get pedicures.

• Q: If you had to rewrite a nursery rhyme which one would you choose/why/how would you make it your own/fun to read?
A: “Old Mother Hubbard” might be fun to novelize. WHY was her cupboard bare? She must have known food had been there—she wouldn’t have checked otherwise. So what happened to it?

Oh gosh those were some great answers! Thanks so much Annette for letting me ask you some questions. Be sure to stop by Annette's blog and if you haven't yet enter to win her cookbook here on my blog!
*May is Utah Author Month
Posted by Cranberryfries