The Girls that are Golden 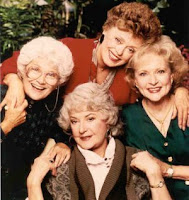 Hubby and I have been Netflix-ing The Golden Girls and we're almost finished with Season 3. I metioned it on facebook a few weeks ago and a friend was surprised I'd admit it. I'm still not completely sure why but I have a guess or two.That show cracks me up. In fact just hearing the theme song makes me all giddy inside. Still, even after hearing it several dozen times recently. (I've included it below for your hearing pleasure.)

What's even more intriguing to me though was that I remember watching the show a few times as a young child (I had to have been seven or younger). Interesting considering the main plot lines.

Of course I couldn't help but imdb a few stats about the show. I love that fabulous database of answers/trivia. We are always checking that site. (Maybe this is why I love love love Xbox's Scene It games.) Just the other day my kids were watching Elmo in Grouchland and hubby says, "You have to go imdb Princess Bride and cross it with that movie, I think Inigo Montoya was one of the voices." Sure enough he was right.

Ok, enough with the tangents.


We got a little curious and wondered how old the ladies really were...

I was never a regular watcher of The Golden Girls, actually.

For the rest of my life, I will always think of my parents' German foreign exchange student when the Golden Girls come up. He LOVED it. He watched reruns every single day. I remember watching it when I was younger and enjoying it, but I have never seen it with adult eyes. I bet I would like it more now.

hi there...i noticed you linked up in mr linky for my swap. i removed the link (since it was your Golden girls post that was linked up, maybe you grabbed the wrong link?)...be sure to come back and link up when you create a post about the swap and link up the URL for THAT post. also be sure to review my rules for participating. i run a pretty tight swap *smile* and i like to make sure everyone playing follows the same rules...cool right? isn't that nice to know?

i would love to have you play so hurry back alright?

I used to watch the Golden Girls when I was younger too. My parents loved the show. Corey hates it so I don't want it anymore. I knew Blanche was the youngest and that Sophia wasn't as old as she was supposed to be in the show. But, I didn't realize Rose was the oldest of the four. Very interesting.

Speaking of Scene It, we need to play again.

I loved that show when I was a kid. I can't believe my parents let me watch it. Isn't it funny that Estelle Getty is younger than most of the cast? She did a great job playing a really old lady! I'm gonna miss Bea Aurthr though.

I just had to come back and say I love your blog!

And I loved watching the Golden Girls when I was younger :)