Shot Glasses for the Virgin Drinker 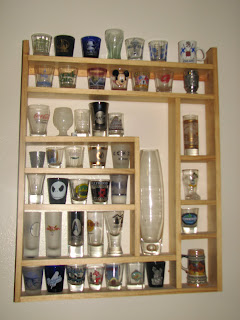 It all started about 9 years ago during my freshman year of college. I was on the National Association of College and University Residence Halls (NACURH) for BYU and every year they have a get together with all the officers. One of the perks of the conference was that we swapped school stuff, basically anything with a school name on it to keep for ourselves.

Some kid had a Colorado State shot glass and I knew my roommates boyfriend collected them so I traded him something for it. But my greed got the better of me and instead of actually passing it on to him I began my own collection (I know it's kinda random considering the strongest thing I'd ever put in these is Diet Coke).

After that whenever I went on vacation I found myself a shotglass and on rare occasions my family have picked me a up a few. My talented hubs made me this kickin' display for Valentines Day a few years back.

My other collection is postcards. I've been collecting those since I was 6ish.

Do you collect anything?
Posted by Cranberryfries

That's so funny. I remember being on vacation in like South Dakota (I know. Totally exciting vacation) and seeing a shot glass and not knowing what it was. Me: "Look at all of these cute little glasses! And they're so cheap! We should get a cute little glass."

I collect Hard Rock Cafe cups. So, I have a few shot glasses too. But, I also have a lot of hurricane glasses and stuff like that. I only have cups from the cafes I've been to. I've been collecting them since I was 14 when I went to visit my sister in the LA area.

Various people have given me Planet Hollywood cups and other stuff like that because they know I don't want HRC cups from anyone. (Does that make sense?) I also have some cups/mugs of Marvin the Martian, Star Wars and stuff like that, but my HRC cups are my favorites.

I collect bookmarks. I've only been collecting them for about 5 years, though.

I collect magnets too, but only from my business trips. I wanted something to keep at my cubicle from each place and a magnet takes up the least amount of room. So far I have about 24 and I'll get another next week. ;)

And I don't like stuff or knicknacks so I don't collect anything.

Rach I could ssee e doing something like that too when I was little.

Jenni I knew you collected names but I didnt realize you 'collected' them. I just figured you had a list of favorites. Holy moly.

Kristina I HATE knickknacks too. My parents bring me back awesome stuff from their world travels and I dont know what to do with it all. Other than this shot glass shelf in my house I have a grand total of about 5 knickknacks so I know what you're saying.

That's a great collection and I love the shelf to display them. I have one shot glass. When I graduated they gave us a gift bag with some stuff in it. They thought a shot glass would put a Vegas flare to it.

The only collection I have it John Deere things. Mostly things that people have given me. Blankets, dishes, a lamp, sun visor, pictures, cookie jar...stuff like that.

I used to collect shot glasses when I was in high school, I think I did it for 5 to 6 years and then I gave them all away.

My second collection was Angels. I loved collecting anything that had angels. I collected them for years and stopped, gave some away and kept ones that really mean a lot to me.

I also have a collection of shot glasses-in a box at my parent's house! I bought my first one at Sea World in 8th grade 'cause I thought it was cute. I haven't got a new shot glass in years, because I haven't really gone anywhere exciting to buy one.
I like to collect postcards too, but they also just sit in a box.

I had know idea about your collection--how interesting. I collect music boxes, watches and most recently the new quarters from each state.