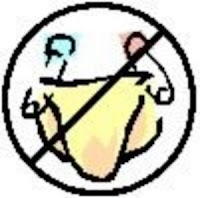 We have one less pull-up wearer in the family. Hooray. I've been housebound all week making sure my daughter was near a toilet at all times and she's been doing amazing. We had a few big bribes prizes she could have if she stayed dry for a week and she's about to cash in. Today's big adventure was swimming at the fun swim park. Hubby also promised her a microphone to sing on the xbox with and I promised her a Buzz Lightyear to go along with her Woody doll. Cha-ching. 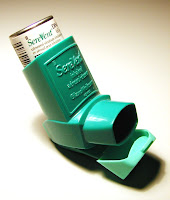 I have asthma. Generally a pretty mild case. Apparently it's aggravated by chlorine(which I found out just last year). I took the kids to swim lessons --my son and I were in a mommy and me class. That means every day for two weeks I was in a pool, in a room, with little ventilation, inhaling chlorine. The first week was fine. The second week I started hacking like I took up smoking. It's now one week later and it's just starting to dwindle away. I tried to go jogging a few times this week and each time I made it literally .2 miles and couldn't stop hacking. SO frustrating. I dont think todays swimming helped in that regard. 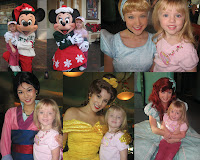 My family is gearing up for a huge Disney vaca in November. It'll be my entire family; my parents, 2 siblings and families, and us.

When I was younger my dad was an accountant for Disney. Which meant we got all the perks. My moms favorite memory is her Disney credit card. For the first 9 years of my life we went to the park often. Not every-weekend-so-you-get-sick-of-it-and-all-the-magic-is-gone often. Often enough my sisters and I as children knew the park as well as our own neighborhood.

Tomorrow my sister is throwing our first party in celebration of this big trip. I'll have to let you know how it goes. I'm super excited. I've been promised one of my favorite treats! (Can you guess? I'll confrim later.)

(Picture from our first trip to Dland with K. This was my oldests reward for potty training. At least thats what we told her. We just really wanted to go and it coincided around the same time.)
Posted by Cranberryfries

I think we're going to try to go to Disneyland for Christmas. I grew up in S. California and used to go up all the time, but haven't been in years!

I've never actually been to disneyland, and I want to take my kids there, but I have panic attacks in large crowds so the thought of it makes me physically ill. What to do.

I'm guessing your favorite treat is cheesecake. How fun to go to Disneyland with the whole family! When are you going?

Sorry about the asthma attacks. I have over-exertional asthma, or at least that's what a doctor told me, but I think it's just due to not being in shape, lol.

I think prizes are the way to go with potty training, or so I've heard. That's awesome that M. is good to go now, though.

PS - I like your new background, especially the ribbon at the top.

Bah! I need help with my background! Yours is so cute!

And congrats on potty training!

And I'm terribly jealous of your Disneyland vacation. Sounds like it's going to be a blast!

I'm taking my girls for Tayleigh's bday because she's free and I just can't wait! They don't know about it . . . what a wonderful surprisr!

Kristina going to Dland is way fun as a couple. Hubs and I went for our honeymoon.

Rochelle that is a pretty good conundrum. My hubby hates crowds (diagnosed anxiety and all) too but luckily the draw of dland is a bigger pull.

Jenni do you have an inhaler. It really does make a nice difference.

Olivia thanks so much! I'll email you my 'secrets' although they aren't really secret. ha!

Rachel that is SO fun! Way to take advantage of a the fun offers. That will be so fun!

Congratulations on finally getting M potty trained! That is fantastic. Isn't it nice to only be changing one kid's diaper now?

Sorry about the asthma. Is it bad in an outdoor pool?

Yay for less PULL-UP wearers! That is my goal in the next few weeks!!

Hey Debbie, I got over here from Mormon Mommy Blogs because of Tarl's part in the giveaway. I recognized the name and followed some links to you. I love your blog. And there is some great stuff in your post today. Paul misses his x-box parties with you guys and Brad.