My computer is working now!! (It still needs a new RAM but at least it's functioning now so I can get back to business.)
In celebration of this glorious occasion I thought it'd be fun to give away an ARC. 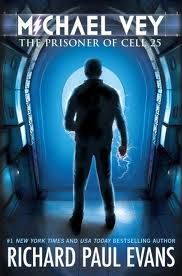 Michael Vey The Prisoner of Cell 25 by Richard Paul Evans
From Goodreads:
My name is Michael Vey, and the story I’m about to tell you is strange. Very strange. It’s my story.
To everyone at Meridian High School, Michael Vey is an ordinary fourteen-year-old. In fact, the only thing that seems to set him apart is the fact that he has Tourette’s syndrome. But Michael is anything but ordinary. Michael has special powers. Electric powers.

Michael thinks he's unique until he discovers that a cheerleader named Taylor also has special powers. With the help of Michael’s friend, Ostin, the three of them set out to discover how Michael and Taylor ended up this way, but their investigation brings them to the attention of a powerful group who wants to control the electric children – and through them the world. Michael will have to rely on his wits, powers, and friends if he’s to survive.
To Enter: Leave a comment
For extra entries:
(please comment for each additional entry)
+1 Tweet about the contest (up to once per day, you can copy/paste this if you'd like:
"I want to WIN an ARC of Michael Vey from @Cranberryfries http://bit.ly/rh7fPc" )
+1 Share it online (facebook, blog, email, etc)
+1 Follow my blog (or twitter, or facebook)
+1 For a creative reason of your choosing :)
Contest will close August 3rd, 2011.
Posted by Cranberryfries

Wow, the summary sounds awesome. I love books where there are powers involved, it makes it so I can escape the real world to a magical one!

Wow, this one sounds so interesting!

Ok, I posted a comment and subscribed, and shared on facebook. Too cool! Love your design too.

too fun, reading about this on twitter has brought me out of blog avoidance... well, mostly. looks like it will be a good read :)