Ideas for kid chores, jobs, helping around the house


I had a few friends ask about how we do kid jobs at my house so I thought it'd be fun to share.

Just to note, for me, I think a big factor in sticking with it, is that *I* was just as motivated as the kids.  You'll see we've tried a handful of things (and often times go back to some after we've let them rest for a bit) because for me/us it's fun to have a surge of newness.

In no specific order here's what we've done: 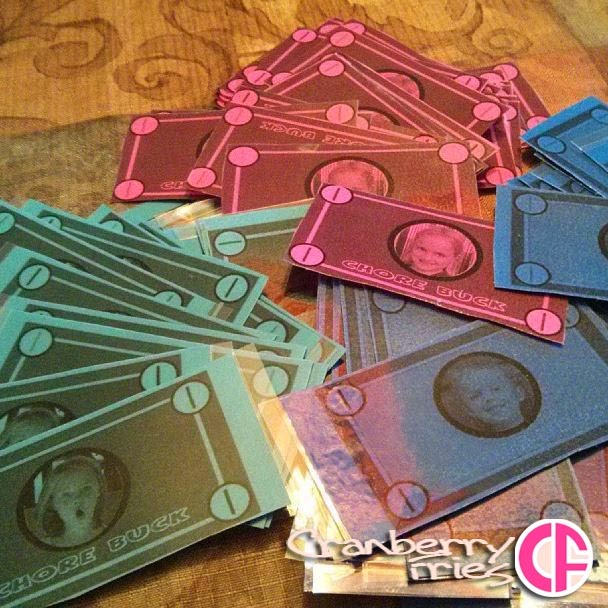 Using a money image I saw online, I created our chore bucks. Colored paper and photos of my kids really make it easier for us all to spot.

We’re currently doing this one again. My 8 yo and I decided together on a good amount to charge for cashing them in. Here’s our current system for earning and cashing.

*I usually have a list in the kitchen of 2-5 things that need to get done at some point and the kids can choose anything from that list. Sometimes I also put a pt value if it's bigger items.

*Consider what motivates your kids. My kids are at an age where these things are particularly motivating. You could put in a special treat, a play date with a favorite friend, a late night (I'll probably add this in the spring/summer), a big toy they've been asking for, etc.

I've also allowed my kids to split, like screen time, if I've got two home right after school who'd like to watch a short show while they eat after school snacks. Tailor it to your needs and what might work best for peace at home. ;-) 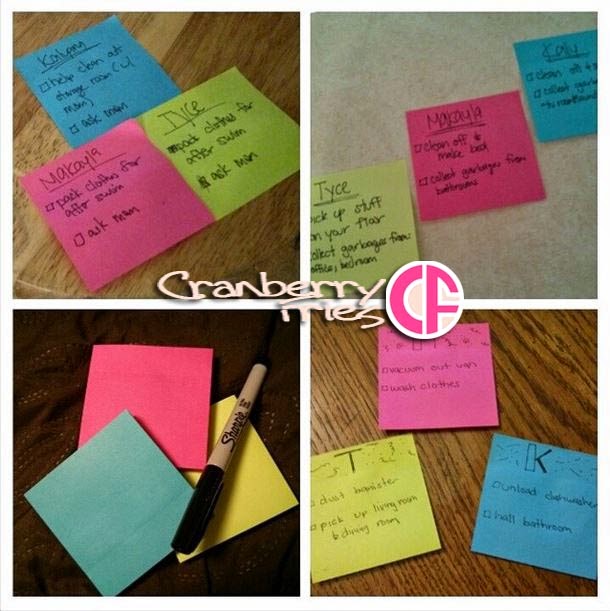 I started this during the summer this year. I bought each kid their own color notes and each night after they're in bed I assign jobs and leave the note out in the kitchen. A few times the kids even ask or sneak a peak to get a head start the night before (works for me!). We have a few 'ask mom', 'freebie' or 'you pick' ones thrown in.

Pros to this one is that it can get as specific as I need and it is ever changing so the kids and I both have stayed interested. A major pro for me is that many jobs we have aren't daily (unloading the dishwasher, taking out the garbage) so I can assess each day and decide what I most want them to do.

Some days I put easy/have-to-do-anyway things on there like practice piano or spelling. Other days they may have one, clean bedroom, but I'll break it up into three jobs like: pick up clothes, pick up toys, vacuum. 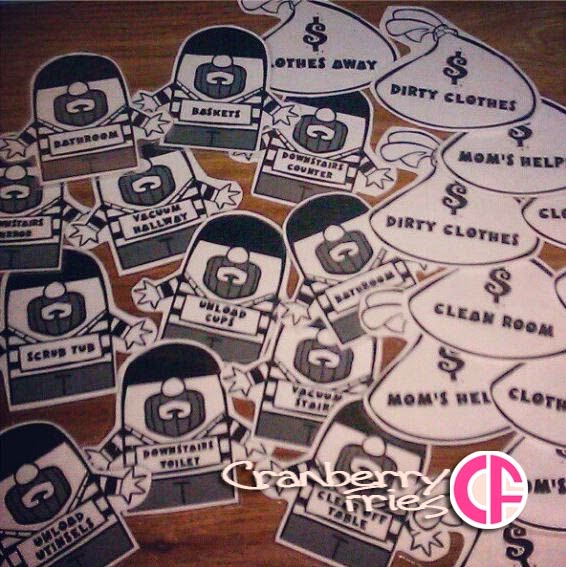 My daughter and I thought up this idea for our chores and had Tarl draw them out for us. We wanted something that could move around on the game board. They’d get the guy out of jail and save the bags of money by doing those jobs. 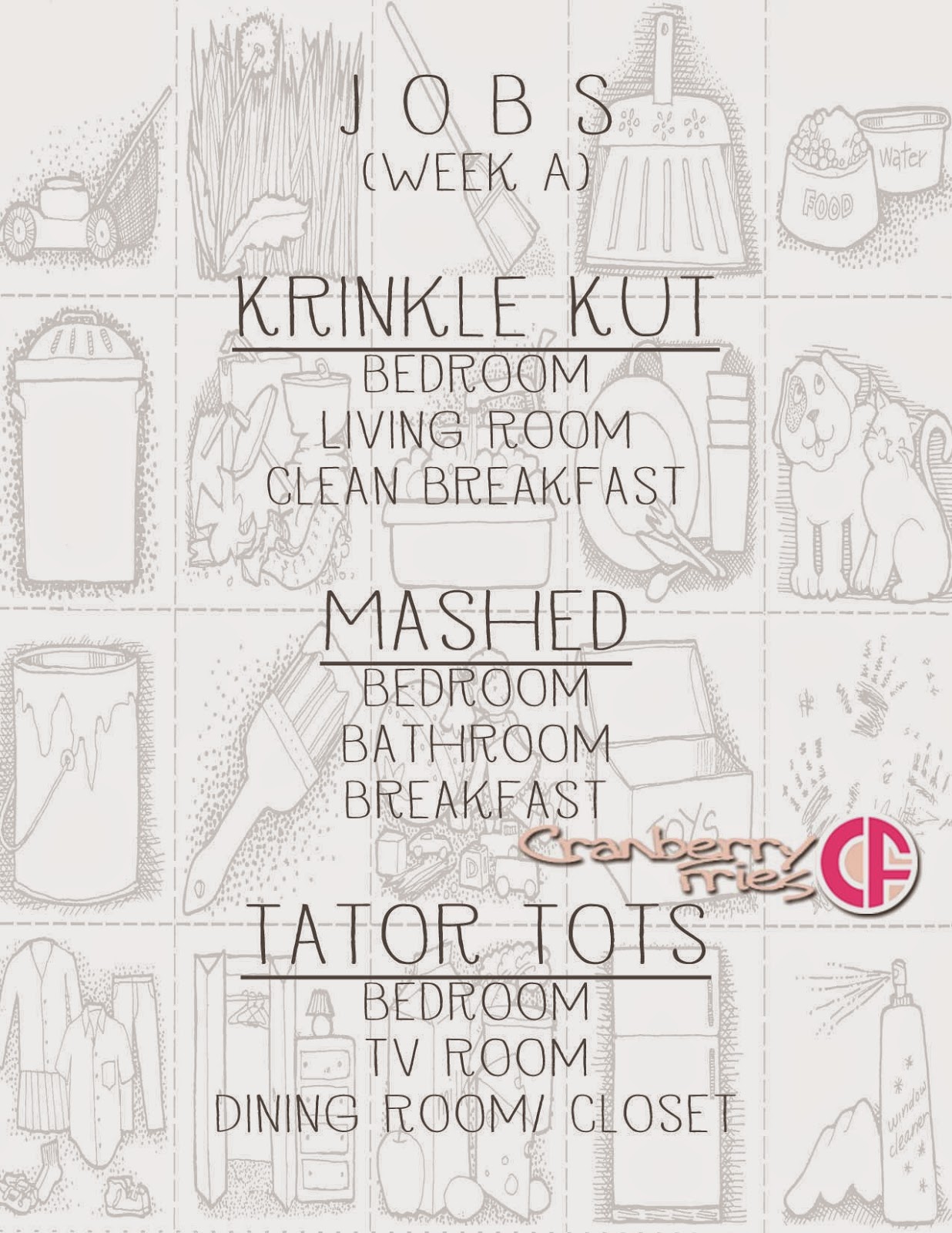 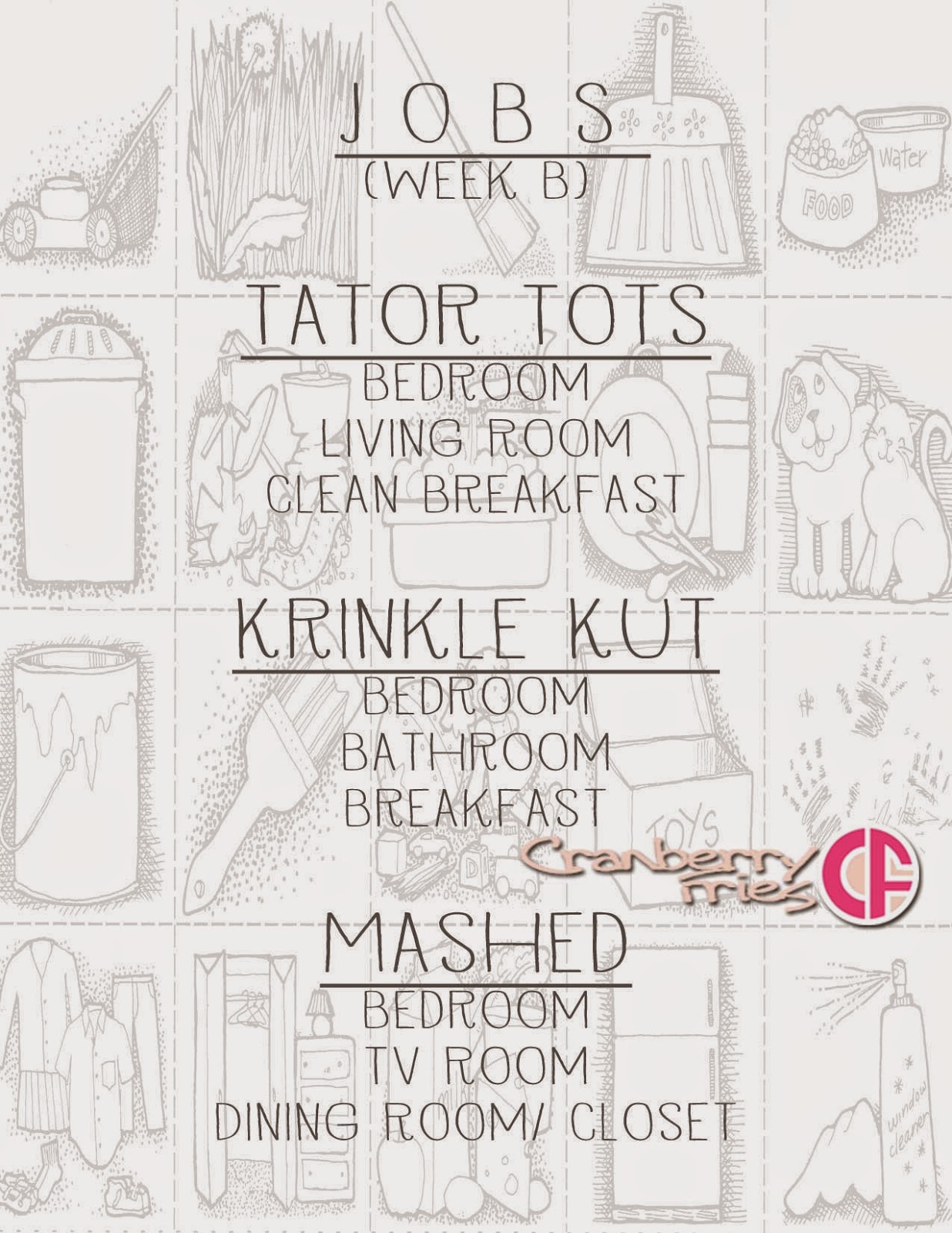 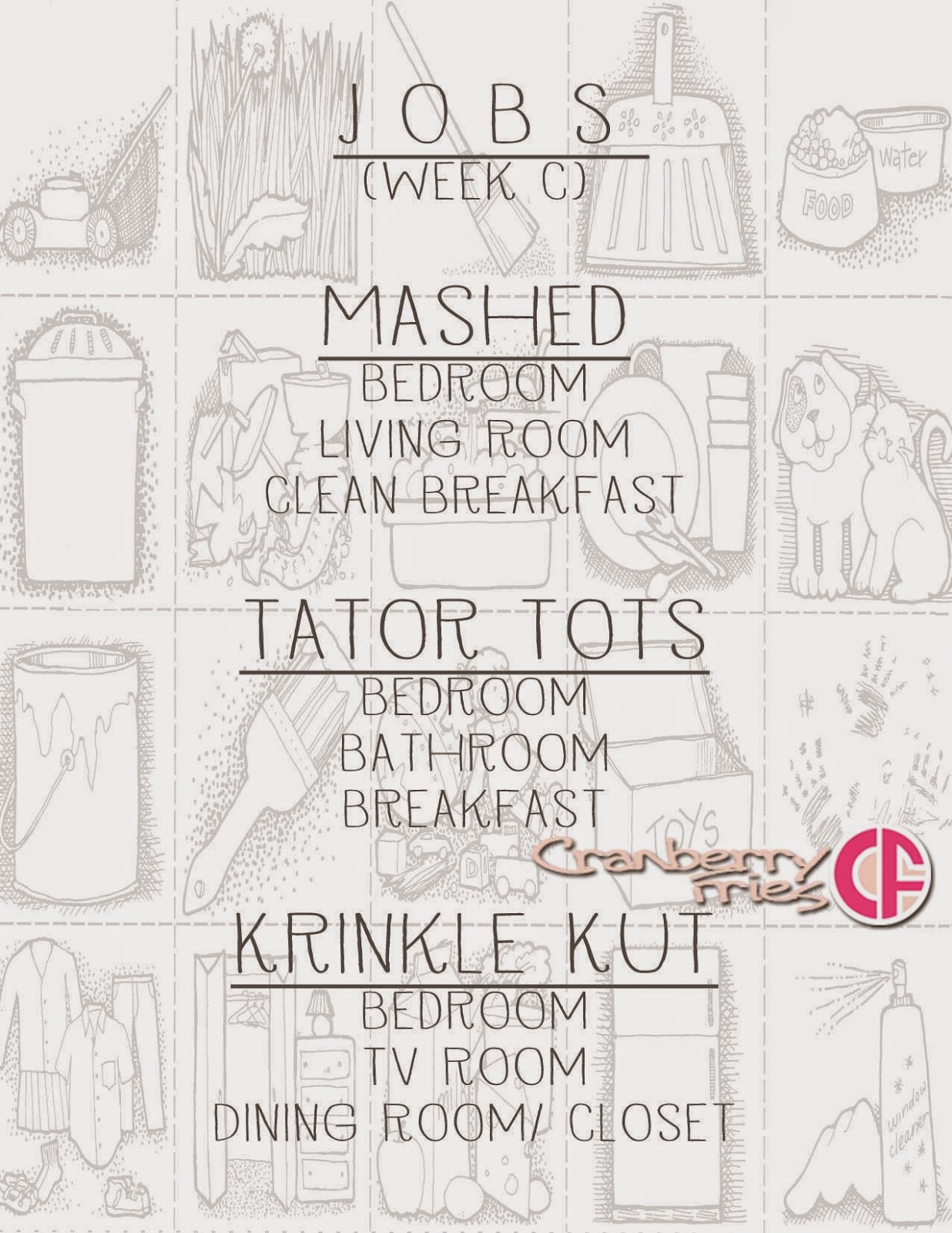 This was one we did last year through the entire school year. It worked fine for the most part. The kids knew what they were in charge of for the whole week so they tended to do a good job reminding their siblings to take care of their own things.

Cons to this one was that I felt like they were already big jobs so I didnt want to then assign them more on top of these. Often times I'll have the kids unload the dishes or fold laundry but I never know when I need those done until that day. Yet on some days their assigned jobs were practically done because it was done from the day before. It was mostly my issue but it's why I like my current post it notes one. 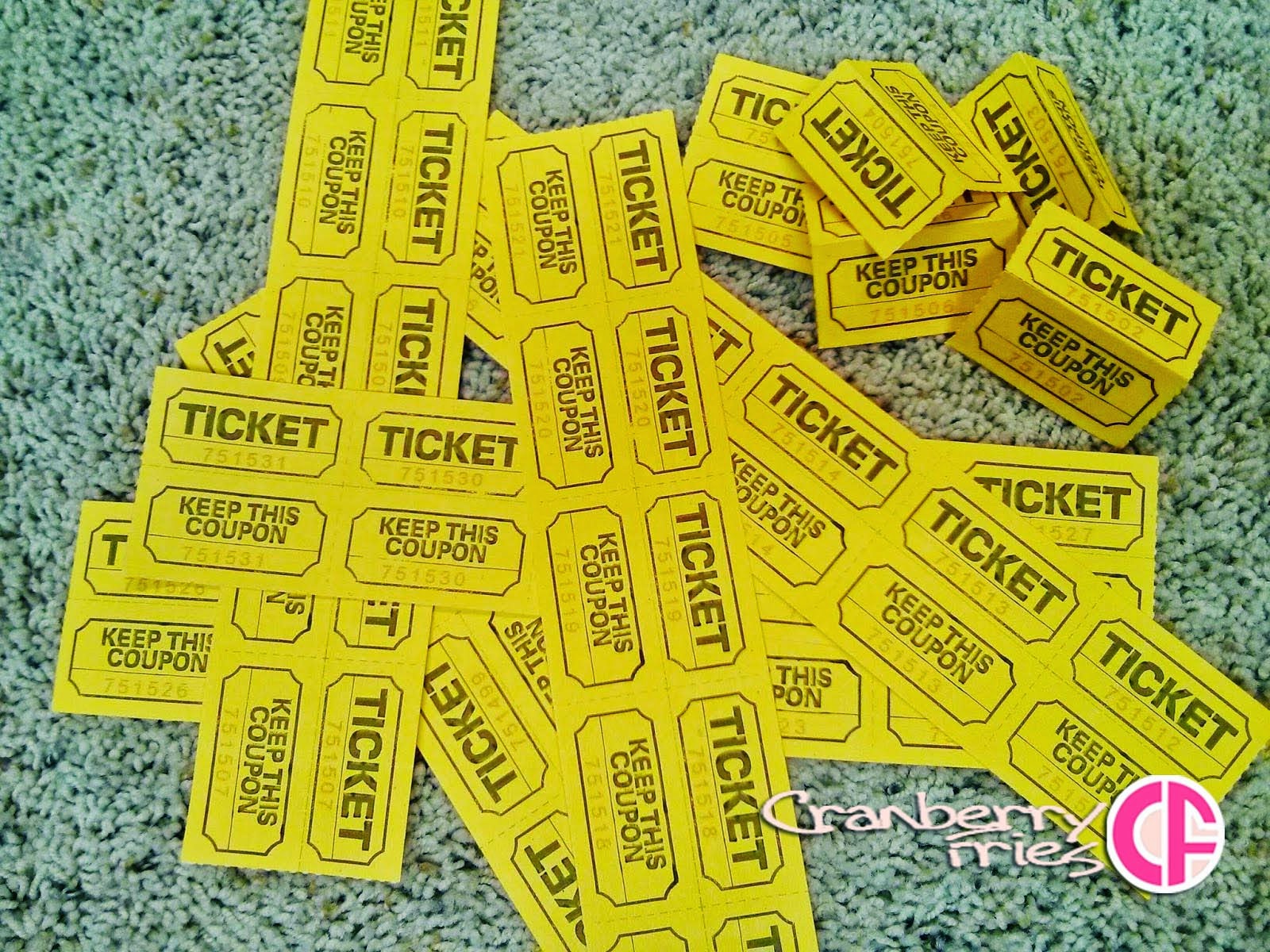 When my kids were still pretty little I used to let them earn these tickets (like carnival tickets) that I found at the dollar store (this is a small amount out of my package). Tickets could be earned for whatever I felt like. We did this when my kids were like 6-2ish. I'd give them tickets for whatever jobs I'd assign them but also for doing me favors or getting along with their siblings.

When they earned 10 they were allowed to pick out any item from my store—which was just a collection of toys, school supplies, water bottles, anything I could find from the dollar store and sometimes I’d through in a candy item. (I had about 15-20 items on hand for them to chose from.) Once a week or so I'd lay the handful of items out on my bed and then bring the kids in making it a big deal that they were at my store and they could browse through the things. They'd have to pay me to take their item so they liked that it was 'official'. 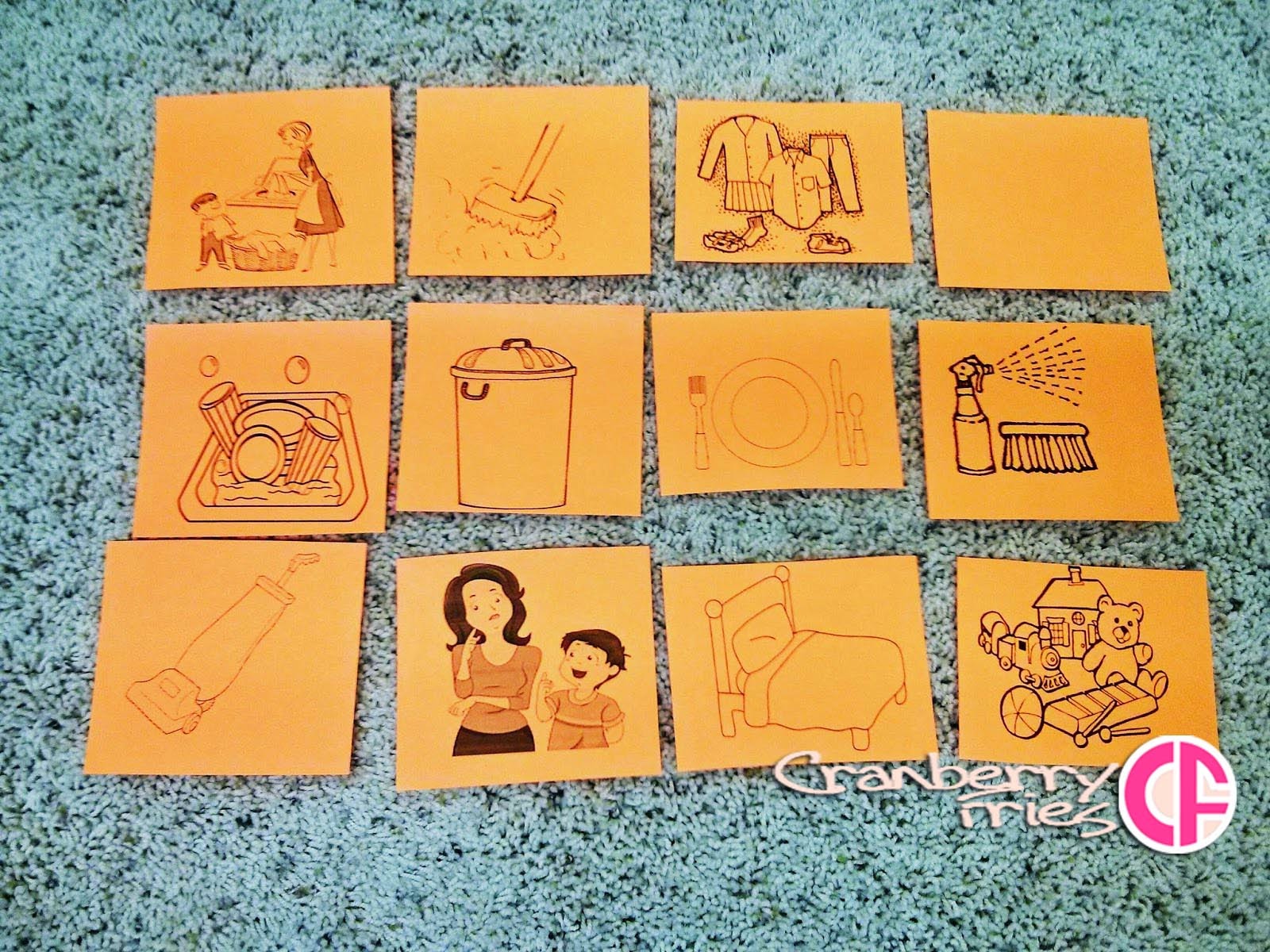 This was mostly when my kids were little and couldn't read. I printed off these pictures of jobs on cards and they'd get to come pick out a few to do that day. Depending on the state of our house I'd remove some or just have them pick 1-2 and have them tidy. I also had blank ones and when they picked that one, I got to tell them a 'mom job' which was anything I needed but didnt have a picture of. Or sometimes it was to help me do a bigger item.

Mostly I just cater whatever we're doing to work for both the kids and me. It works best if we're all excited about it, but mostly if I'm interested enough to push it (and get the kids excited about it). When I can tell we're losing steam, thats when I switch it up again, but I will say, now that they're older it seems the stretches last longer! I hope this gives you some good ideas. 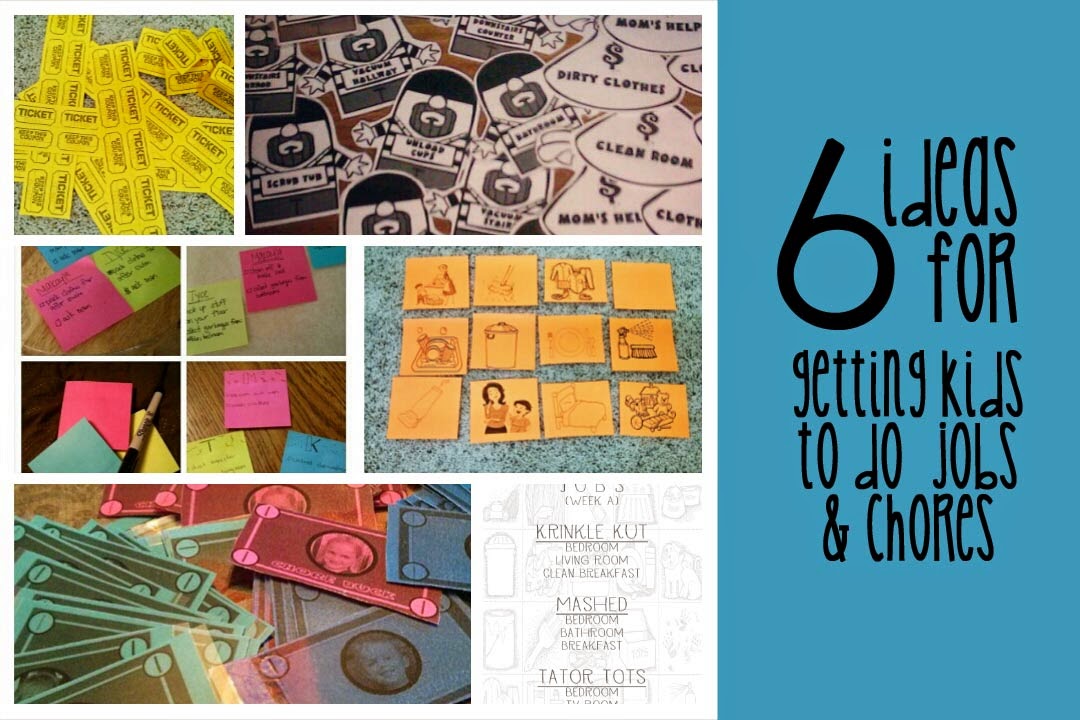 Do you have some that have worked really well for your family??
I'd love it if you wanted to share in the comments.