I've been a huge fan of the Eyre's and their programs and books for a LONG time (read: since I was 4). I really believe these guys have some incredible wisdom and this new book looks to be one worth reading.

Richard Eyre sent me a couple of summary's of the book and I'm including them both for you. Check it out! 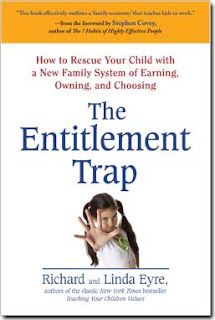 Short version:"Kids' sense of entitlement is the biggest problem today's parents face. Children seem to think they should have whatever they want, and whatever their friends have right now, and without working for it. The reason entitlement is a trap is that it destroys motivation, incentive, creativity and work ethic. It takes away from our children everything we want to give them. We have come to believe that the antidote to entitlement (and the prerequisite to responsibility) is to help children feel "earned ownership" of their spending money, their "stuff", their education and grades, their values and goals, and their decisions and choices. This is a book on how to give them all of that!"

After elaborating and explaining something that we all know--namely that our children feel more entitled and are more spoiled than any other generation of kids in history--this book tells parents what to do about it!

Unknowingly, most parents are contributing to their kids' sense of entitlement by giving them too much and expecting too little of them. "Allowances" are usually part of the problem. Kids queue up like a welfare line each week and demand their money. Since they did nothing to earn the money, they don't perceive ownership of it, or of the things they buy with it. The same applies to the toys and gadgets and clothes that we give them. They gave up nothing for it, so they take no pride in it.

Unfortunately, its not only their "stuff" that they feel no ownership in or pride for--it is also their goals, their choices, and even their values. If they don't think of them as "theirs" (often because we have just thrust it all on them) they are unmotivated and without incentive!

To change all that is the goal of this book! Young kids are both flattered and instructed by having real responsibility and by being paid for what they actually do rather than given handouts.
The Entitlement Trap gives parents a detailed blueprint of how to establish a "family economy" wherein kids earn, budget, save, and give money and where they buy their own things and become truly responsible for them. It involves an interest-paying family bank complete with checkbooks and a pegboard or on-line system of keeping track of task accomplishment.

As Stephen Covey says in the forward, "
In the first half of the book, you will learn how to make your kids economically savvy and financially independent. . . . In the second half, you will learn that the family economic model is just the framework and the metaphor for lessons even more important."

The second half goes on to apply the same ownership principles to kids' grades and education, to their choices and goals, and perhaps most importantly to their values. Once our children accept and perceive real ownership of all these things, their motivation and incentive grows exponentially, and our job of teaching them responsibility begins to feel possible!
*May is Utah Author Month
Posted by Cranberryfries

Oh, I want this book. It is something I see in my own kids, and some around me. And this seems like it has some ideas to combat the idea of entitlement. Which probably starts with me, but shoot, this is so worth it! Thanks for sharing a book that is going on my must read list.

I love the Eyres!!! I read their books when my kids were young and it did make a difference in how we parented. We pay our children allowances, but there are job s they have to do to earn that money.

I see this emotionally as well - our kids are emotionally entitled to ALL my time and ask me to do ridiculous things for them...like can I turn off a light and I'm in the other room or even upstairs...just so they don't have to move. LAZY! So...my mantra with them is "I won't do for you what you can do for yourself." Sometimes...that means I look mean because I won't get them a glass of water if I'm engaged in some other activity, etc. So be it. I'm not the maid or the servant....I'm the mom.

Love this concept. And it's so true!

Kristie I was saying the same thing when my husband and I were talking about this last week. I know my kids are picking things up from me or that I'm enabling it but at the same time I'm not purposely doing it with that in mind you know. I LOVE that this is a direct approach to a topic I know is important to work on.

Shannan thanks for those examples! I love that mantra too.

Olivia it is right?

I need to get my hands on this book! I have good kids, they just don't keep anything nice. I've been trying to instill in them a sense of taking care of the things they have, but so far I haven't had much success. Maybe this will give a good push in the right direction.