Secret stash in my car

I wanted to share a little secret with you.

These are some of the best things I keep in my car! 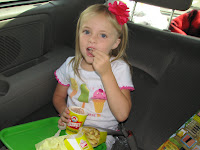 They come in handy when we're on long car trips and decide to grab a bite to eat. 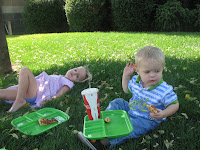 They're also fabulous for those random picnics. (We grabbed a slice of pizza, drink and churro at Costco for like $3.28 and split it all between 3 of us! However there weren't enough seats inside so we drove over to a bit of grass nearby and had a picnic.)

I've had these lunch trays for a few years now but we just put them in our car about 1.5 years ago. I keep them under the seat in my minivan so they're not in the way but we always have 'em with us. 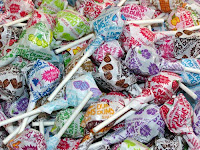 I also keep a bag of these under the driver seat in my minivan.

Honestly I don't pull them out often, but they come in handy when we're in the middle of the store and my kids start whining or getting antsy. I'll tell them if they can be good until we leave, I'll give them a surprise when we get to the car. It works quite often! (The tricky part is I have to buckle them in before I pull out the Dum Dum suckers because then I pretend like I pull them out of my pocket. They still have no idea there is a stash in the car.)

------------
P.S. A huge thank you to Von for tagging me so I could enter a fun contest. Looky what I won! I think I might have squealed. Anyone have one of these Cricut machines? Any suggestions on which cartridges I should look out for?
Posted by Cranberryfries

what great ideas. I'm definitely going to steal them. And I'm super jealous. I just started wanting a cricut last week. I found a tons of fun crafts that you can do with it. I'll find the link to the blog and send it to you.

Great ideas!! And I LOVE my Cricut. LOVE it.

What a good idea! If I kept stashes of any type of food in my car, it wouldn't last more than a week. I have no self-control like that:)

Sexypants, those are great ideas! I may have to steal them. Where were you when my older ones were little? Oh yeah, still in high school. :)

I have a secret stash, but it's only for me. It usually involves chocolate and Sour Patch Kids. I have to keep moving it because T has figured out I have one and keeps searching for it.

That's awesome that you won a cricut machine. I've always wanted one! Have fun with it! :)

I like to keep a secret stash of burritos in my car.

Yeah a little something ya learn along the way. Actually the tray thing was just on accident, but it's one of my favorite items in my car now.

Kimberly....where did the sexypants come from? That is so funny because I was JUST working on a post about the nicknames I used to have...did I accidently publish it without being done yet? Haha.

Sour Patch kids are yummy and totally are car worthy!

It was a fun tag! although I didn't try for the giveaway it was a great giveaway! I keep saying I need to hang with you more your so dang lucky!!

I love the stash in the car! Wish I had thought of things like that when I needed it!

I have trays that we use for our "TOT TIME" activities during the day but they are just flat- I like the ones with little cups and such. Brilliant idea.

I need to keep some Dum-Dums around too. Store meltdowns are the WORST!

I so use the Dum-Dum trick! Works like a charm...as you know!

I love the trays. Where did you get them?

What a great idea about the trays. I actually have those trays just sitting in one of my cupboards. I should totally put them in my car. And I have been using the dum dums every since Ethan was 1. It works wonders!

You won a Cricut machine?
AWESOME!

The trays are a really good idea. I try to keep things stashed in my car, but my DH keeps cleaning it out.
Or I just eat the snacks I stash.

Krystyn @ Really, Are You Serious? said...

What a great idea...I don't have anything fun like that in the car!

Oh yeah, I keep those things in my car and I don't even have kids :-)
xo

that honestly is like award winning advice! love it :)

I have a stash of smarties in my purse for that very reason. . .

Debbie... back in the days when I had a houseful of really little boys, and a Dodge Caravan, my sister was getting married, and they asked if they could borrow our minivan in order to get a carload of people to the temple. Well, at one point, someone had to fold a seat down, and when they did, they found not one, not two... but SEVERAL uneaten hamburgers from McDonald's happy meals... they had petrified in there:) I do keep my car a lot cleaner now that I don't have little people... but those were crazy days:)

First, the pictures of your kids are adorable! I loved the ideas of your stash and believe it or not, I have to keep a stash to keep my husband and son from falling asleep in church. When I notice them nodding off, I give them gum or candy to give them that sugar rush so they can stay awake!

My kids would soon catch on and would be raiding that stash daily. Great idea though.