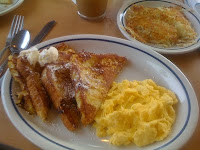 This morning I attended my first "Freedom Friday", Mommy only breakfast at IHOP. My friend Tawnya threw it in celebration of the kids going back to school. Isn't that a fun idea? I plan on doing on next year too.
*****

My two year old has learned how to say "meany head" from his older sisters. It's part funny (cause his little voice is so cute) and part frustrating.
*****

Why is it tunafish smells so nasty yet tastes good? (I know I'm gonna get comments about tuna being nasty now, I know it's not for everyone.) Are there other foods like that for you?
***** 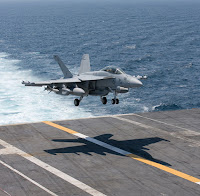 Hubby and I have been watching a running documentary about a USA Carrier ship that was deployed about a year and in the water for about 6mo. The other night we watched pilots trying to land their F16's (I think) on a pitching deck. The seas were crazy and these pilots were amazing. It was really intense. We netflixed it, if you're interested I believe it's called "Carrier" from PBS.
Posted by Cranberryfries

after just coming back from San Diego and having spent time on the U.S.S. Midway i am so going to look int to that on netflix! we came home so filled with the spirit of our nation and the love of our military. we also saw the air and space museum in Balboa Park..

I love tuna, but yes, it does smell nasty. Most fish smells nasty but tastes delicious. I think some cheeses are that way too.

And yes, I think tuna is gross all the way around. My mom never purchased it when we were growing up because she didn't like it, so the first time I tried it was after I got married. Yuck!

I love going to breakfast on the first day of school without kids - such a treat!

I think vanilla extract smells AWESOME, but it tastes horrid. The opposite of tuna.

Debbie, I just love your blog. Now that Krissie has shut hers down, I just have yours, Melanie's and Brodi's to follow. I love the way your mind works and all the things you are into. You have another blog right-that is private-right and I think I'm invited, I have forgotten the name of that blog.
About a month before Foo died all she seamed to want was creamed tuna on toast. So I fixed it for her every few days. She used to fix it for us when our appetite came back after we had been sick. See if your Dad remembers. Love you--duey

ps check out "thehealinggroup.com" and explore around. That is why Krissie shut her blog down.

How about food that smells good but tastes nasty? Coconut & pineapple.

Totally agree about the tuna, it smells like cat food, but so yummy with mayo and relish. I like mine on saltines, I hate how soggy it makes bread. Weird, I know.

As much as I love guacamole, I hate the way it looks the next day. If it looked like that from the beginning, I don't know if I'd eat it! Who am I kidding, of course I would. And really, there usually isn't any left the next day. :)

Breakfast was great! We'll definitely make it a tradition, so more people can come to expect it. Now, we'll just have to decide where to go next year . . .

Carrier sounds totally up Anthony's alley. So what - we come watch it at your house some time? I doubt they rent it Redbox :o). (PS, I want another entry - this contest sounds the most intriguing to me. Oh, and question 10 was weird and duh how could I miss the laptop question?)

I laughed when I read you tuna fish thing. Paul HATES tuna and I actually like it. And the fact that it is low fat and high in protein is a plus. But Paul hates it when I have just eaten it or I open a can of it. But you are right, it tastes much better than it smells!

I like tuna! I didn't realize it smelled bad. heehee.
Nothing else really does that for me.
Randomly reminds me of my pregnancy though, I mean nothing foodwise smelled bad, Just Mr. Black Sneakers! :D Don't know why, just him.

Okay... I have left you so many comments now, I think we may actually be engaged. But I just have to say, I am going to check out "Carrier." I love my Netflix:)