BMW The TV Show (not the car) 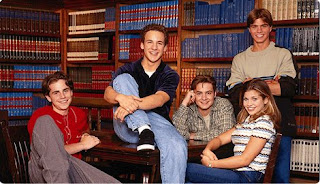 I LOVE Boy Meets World! L.O.V.E. When it first started to air on TV (in 1993) they were the same age/grade that I was. I think part of it's appeal was that it was in the TGIF lineup but it easily was my favorite show even back then.

A few years ago when Buena Vista started releasing some of their television shows they threw BMW into the mix. I was there at the store the day they came out. However after smaller sales (I"m assuming) then they were hoping for, only three seasons out of the seven were released. The fourth season had been scheduled for release but kept getting put off until they finally said they weren't going through with it.

Through the magic of the internet though I found a nice young man who had ALL seven seasons (read 157 episodes of pure happiness for Debbie) on disc. For years now I've been able to continue my love for a fun childhood memory. While I may not be the most avid trivia fan I do know my share of crazy facts about the show and it's stars if you're interested. Haha.

A little sample of my happiness:

I loved Boy meets world too! And Scott still talks about how hot he thinks Tapanga is!

Cute blog spot Debbie--I will visit your blog often--BTW I still remember about lunch. I am just barely functioning for a minute--we're getting it figured out--don't tell your Dad or anyone because I don't want anyone to fuss. We have a big family trip next week for a week and then I should be able to get my act together.

Oh gosh, that hilarious! I remember that show. I didn't watch it much but I had a HUGE crush on the friend of the main character guy. Ah... blast from the past!

That was a standby at our house. For some reason BMW was always on when nothing else was.

Rochelle Topanga is a babe, I'd have to agree with Scott. haha.
Thanks Duff! Glad you came over to say hi!
Olivia are you talking about Shaun? Aka Ryder Strong? He's pretty cool. In real life too. I've followed his career and watched interviews with him.
Rachel, are you talking about when you were growing up or a few years ago? I know the Disney channel started playing reruns several years ago and it was on several times a day. I was always sad knowing it was on and I couldn't catch it. Good stuff. Good stuff.